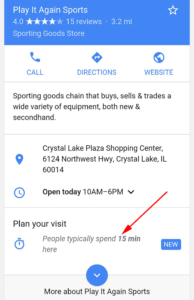 This weekend, I noticed a new feature in the Knowledge Graph. With all the changes/testing Google does on a regular basis, I decided to reach out to Barry Schwartz and Mike Blumenthal to determine if they had seen this new feature before. Turns out they had not.

What is the new feature? Google is showing the time a person typically spends at an establishment.

I found this when searching for equipment at a local Play it Again Sports. Curious to see if there were other industries/businesses showing similar information, I searched for a few local restaurants and found they did.

Mike, Barry and a slew of others have already written overviews of the new feature, so I won’t get into that here. What I did want to discuss is the usability and privacy concerns of this feature.

Google has been collecting loads of data from Android users for years now and we are slowly beginning to see just how much data they have with several fairly disturbing product releases in the past few months. Specifically, Google began showing Popular Times for an establishment in the Knowledge Graph. More recently, Google began matching photos of businesses from users Google Photos. You can see this in action when you take a photo and then receive a pop-up on your Android Device asking you to add the photo to the business to help others understand the location. This is Google using data location, privacy and AI to make life easier, all the while creeping us out. Google Photos was a great move as it began developing into a crowd sourcing project and helps local businesses at the same time. It does raise some issues on privacy though.

Is this a Useful Feature?

I do not see this feature as useful for grocery stores, department stores or many small businesses. Where I can find this feature useful would be in certain service industries. Restaurants, salons, certain auto repair shops (think quick oil changes) and immediate care offices come to mind. To me, any business which takes reservations or requires an appointment would not need this feature, nor would the customer.

That being said, this could be another Google test. They could be testing to determine which industries this would be most helpful in, how many people use this feature or they could be targeting personal assistants more than general customers.

What do you think? Have you noticed this feature yet? Do you find it useful?