By now, we all know what Pigeon is about. A quick recap for those who are behind….On July 24th, Google launched a new local algorithm, later dubbed Pigeon by Search Engine Land. Results are still coming in though it appears the algorithm is a huge shake up in local search as both Google Maps and Web results were impacted. It is supposed to provide more useful, relevant and accurate local search results which are more closely tied to traditional web search ranking signals. (I will prove later why I think this is bullshit.) As of now, Pigeon has only rolled out to US results though it will most likely roll out to other countries and languages in the near future.

The new algorithm ties deeper into Google’s web search capabilities. What’s that mean? It means the local search section is now going to use ranking signals similar to organic search. Prior to the update, the organic listings were using a different algorithm from the local search listings.

Breaking it down even further, Google is taking local into account much more now. “Wait a minute” you say. “Wasn’t Google’s local algorithm already taking local into account?” You’d be correct with that statement, though now Pigeon is upping the ante. Early indications show Google is zeroing in on the center of a particular city, then using your query to find specific goods/services closest to the city’s center. For instance, if you are searching for Skokie pizza, Google will use the center of Skokie, IL as the basis for the search and return pizza restaurants most near it. There are also other various theories suggesting Google may be using your IP and will return results most near where your IP is located.

Google is using Latent Semantic Indexing (LSI) in the localized algorithm now as well. This technology has been used in the organic algorithm for quite some time, since at least 2010, and now it makes its way to local. LSI is a technological process in which the search engines index a web page and give weight to the website’s central theme rather than to specific keywords. The engines will sort sites based on the frequency of a variety of terms and key phrases linked together instead of focusing on the frequency of a single term within the text.

Since Google is now using organic-like factors in ranking, we can assume clicks, customer engagement, bounce rate and domain authority could also be used in the new Pigeon algorithm. I suspect it may be too early to come to any conclusions about these factors as of now.

Take a close look and you will notice a few prominent changes appearing in the Map Pack. With many queries the Map Pack has decreased significantly – going from 7 listings down to 3 and from 3 down to 0 in many cases. Mozcast and Whitespark conducted separate tests and reported a 23.4% drop in local packs. This is a dramatic change and creates an even more fierce competition in local.

There does appear to be less duplication in the SERP’s and Map Pack with some queries as compared to before. Other queries, like this one, have more duplication. Hooray Estrella!

Two of the more prominent winners in the algorithm update were (1) Yelp and (2) other local directories. Earlier in July, Yelp accused Google of stealing its search traffic and they then leaked their study to TechCrunch. To sum up Yelp’s accusations, they accuse Google of promoting Google + and other Google properties above them in the searches. Now, their whining seemed to earn them a place on Page 1.

Maybe we should just call this the Yelp update. I mean, look at this: 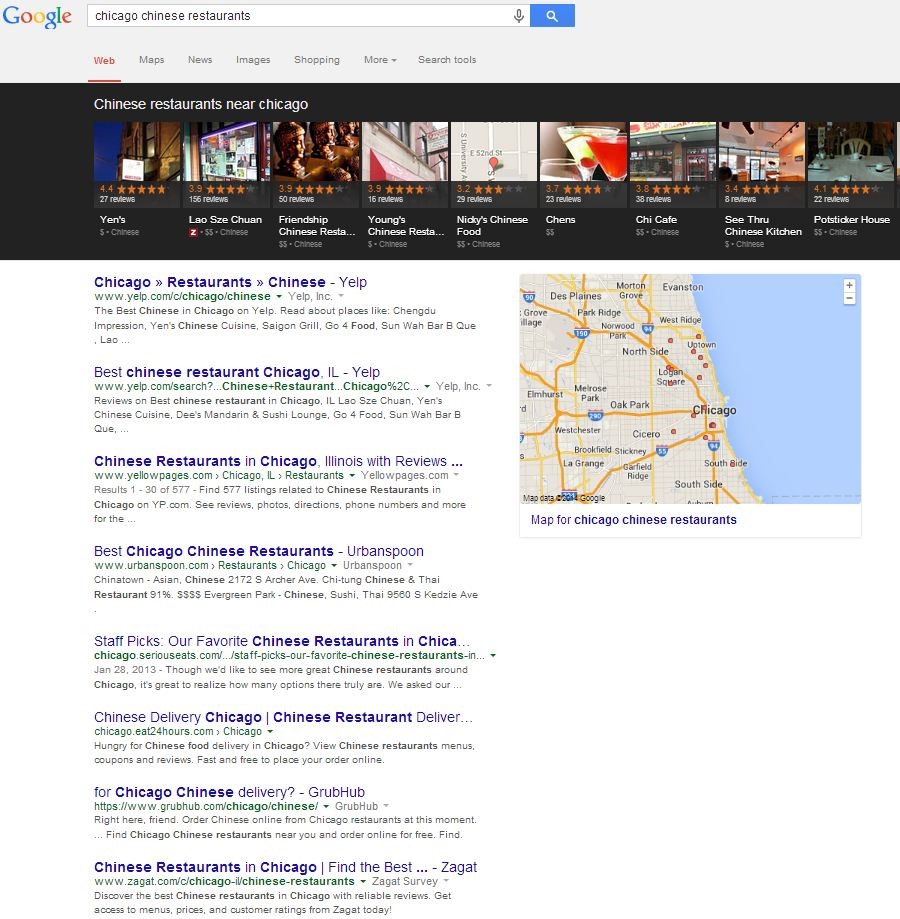 Yelp grabs the top TWO spots when searching for Chicago Chinese restaurants, followed by YP.com, Urban Spoon and then several other directories. Apart from the carousel, there aren’t any local restaurants within the first 8 listings, and the Map Pack is gone.

This time we get the carousel again and, what’s that!? A local listing! Found one guys! Yelp takes the next THREE spots followed by another local pizza place (which is also the Yelp listing directly above it) and then Dominos twice. Don’t overlook the PPC ad directly below carousel as well. 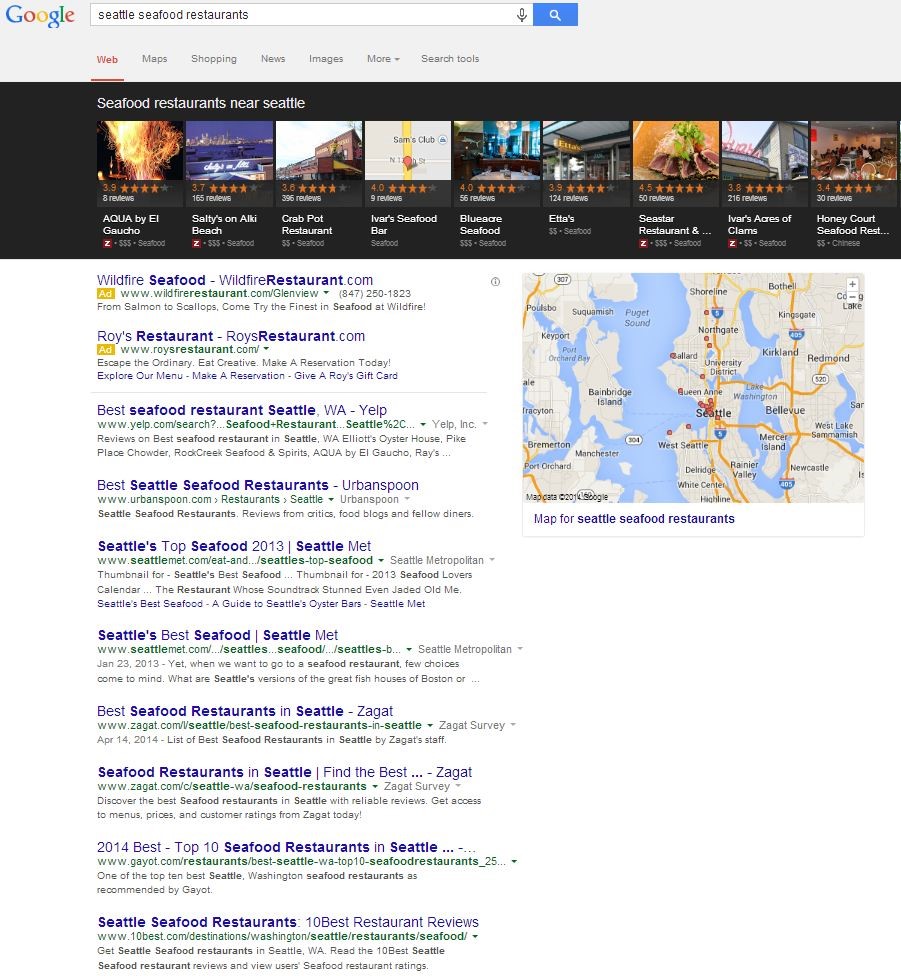 A search for Seattle seafood restaurants yields carousel, PPC and then all directories. Not one listing on the first page for any local Seattle restaurant. Is this helpful for searchers?

Good win for Yelp and other directories. I can’t really complain too much since SSF gained a bit of traction or at a minimum, didn’t lose any. Is this the user experience Google is going for though?

This is why I think Pigeon is bullshit, at least in Version 1 (as I write this, I see Google may be updating Pigeon already). In researching several industries, I noticed the results are less than ideal and in many cases, worse than before the Pigeon update. To me, the quality of the SERP’s has taken a hit. This can’t be a good experience for users or Google. Look at these results for instance:

A search for Chicago car insurance shows PPC ads, because of course, then a mystical 7 Map Pack, followed by Organic. Look closely at the Map Pack though. The first two listings have terrible reviews. Why would Google promote or want companies with terrible reviews coming up first? I understand the review process and how things can get skewed but still, if I am looking for car insurance and see those 2 companies with poor reviews, I’m skipping over them. Maybe a lack of clicks and high bounce rate will see those companies move down and out, but for now they are there. 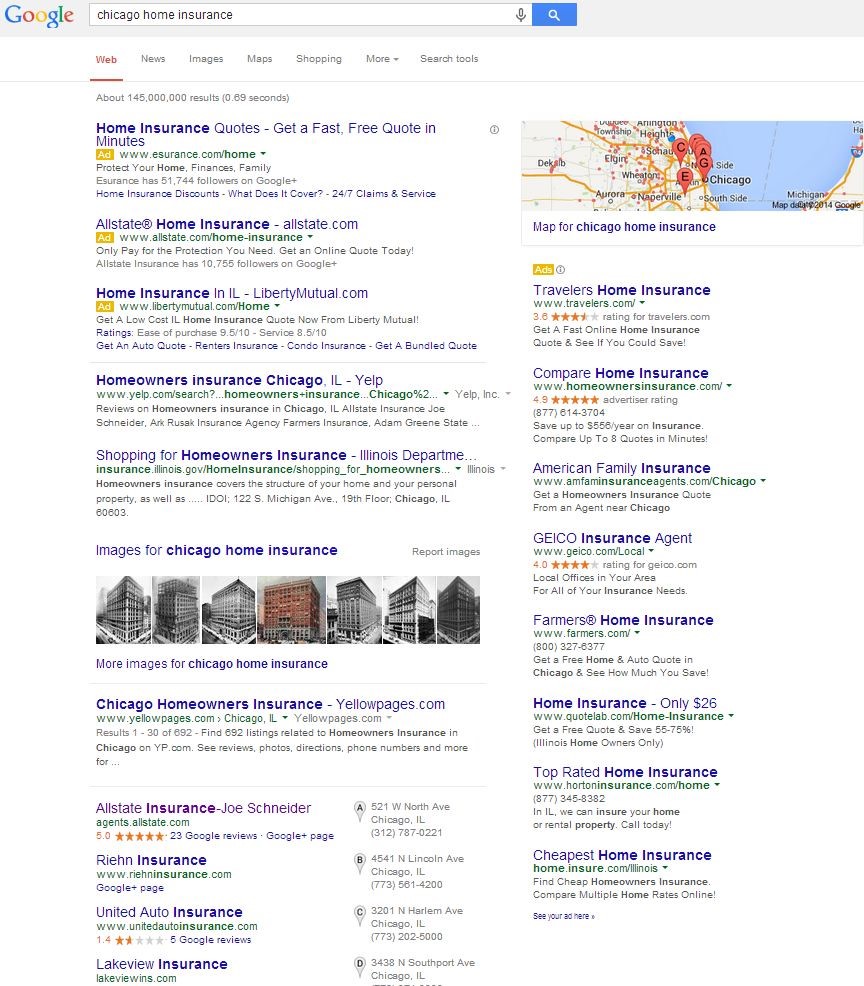 A search of Chicago home insurance isn’t any better. Ads followed by Yelp, Illinois.gov, YP and then the Map Pack. Again, if I’m searching for home insurance, I don’t want to see Yelp and YP at the top. I want agents or companies who can help me with my insurance needs.

This next one may be the most egregious. Search for Cleveland car insurance and you’ll find this:

Ads, Calculateme, Geico, YP and the Map Pack. Look closely at the Map Pack. The second listing, which was first earlier in the day, is a website which doesn’t exist. It is a fu***** parked domain! The phone number doesn’t even work! I called the number and it is disconnected. Look at the URL! How is this site ranking? Where did the address and phone information come from?

Look again. This is the information which comes up when you click on the arrows for more information. Incredible.

A search for Indianapolis car insurance returns similar results with Calculateme and YP coming up first. There are a few mysteries in this Map Pack. Geico is listed with an agent contact, though they are strictly an online business with no actual insurance agents. Indiana Auto Insurance Group is un-kept, low quality and spammy. This site wouldn’t survive Panda, yet it is listed 3rd in the Map Pack.

Lastly, Miami car insurance. Big win for Estrella Insurance here as they take 4 of the coveted 7 Map Pack listings and the #1 Organic spot.

Most of these are spammy results. Some are outright pages which don’t exist. Others are what I believe to be awful websites which should have been squashed by Panda. Why are they showing up in the Map Pack? Where is Google getting the data from? How can this be a positive experience for people searching for insurance?

Maybe, just maybe if there is enough traction and whining about shitty search results in the SERP’s, another change will be made. Who knows…though it worked for Yelp.