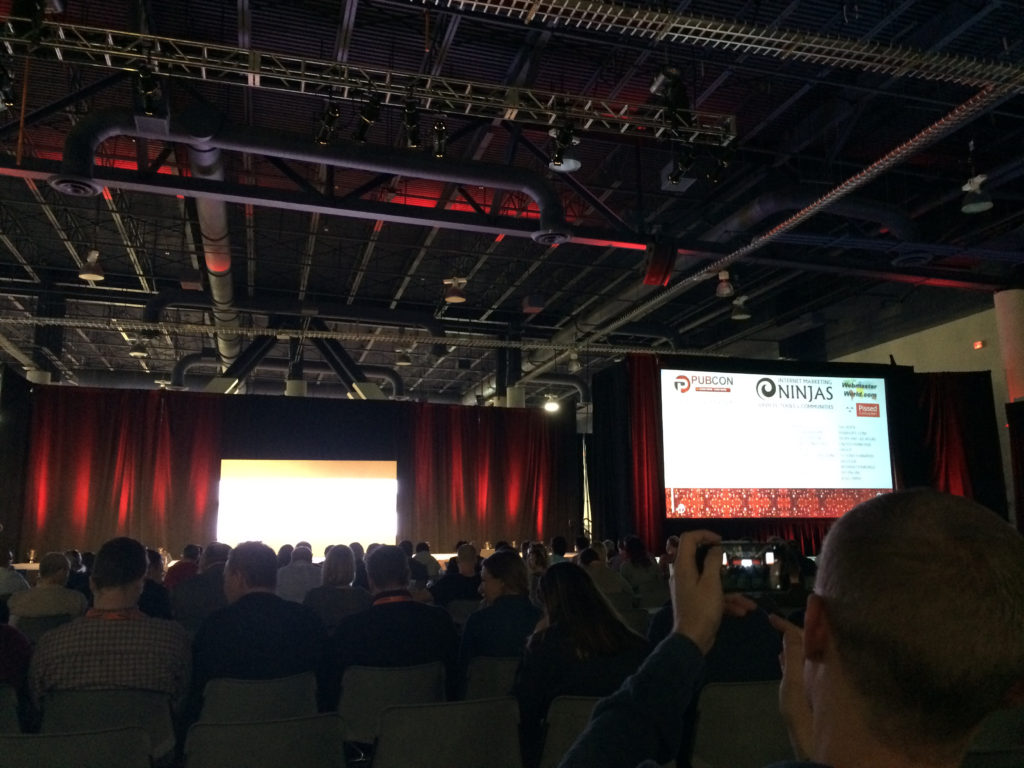 Last week I had the awesome opportunity to attend Pubcon in Las Vegas. I’ve been in the industry long enough to know what Pubcon is about but had yet to make it out to a conference. I was very much looking forward to everything it had to offer. Below are what I found to be the pros and cons of this years Pubcon Las Vegas.

Meet People Outside My Niche

Being in Local SEO, I’m in a niche of a niche in Digital Marketing. I’ve been to several SEO conferences and try to stay active and relevant on Twitter, thus I know most of the more prominent names in the Local game. I was excited at the opportunity to meet new people outside the Local SEO realm and Pubcon did not disappoint.

Meeting new people is not something I am terribly good at or something I do often, so I knew I was going to have to expand my comfort zone. The attendees and speakers at Pubcon had a diverse skillset, so most had no idea who I am or what I do. Nearly everyone I met was happy to chat about their business and experience as well as mine. I met many veterans in the industry, including several who had the foresight to begin businesses in Digital back in the 90’s. Many of these people are well respected and some of the best in their niche.

I was also able to meet several people in person for the first time. The nature of our industry is to find the influencers and follow them on social media. Through this process, there are many people we “know” for years though we have not met. It was great to be able to finally put faces with Twitter handles.

With any conference I attend, I am looking to take one or two actionable items back with me. I figured with the amount of talented speakers and diversity of topics, I should be able to bring a few new ideas back. I thought there was some great information presented in a few of the sessions, the keynotes were packed with information and insights, and the networking opportunities were top notch. I’ll be recapping the sessions I attended in a separate post.

I mentioned the networking above but I’ll expand. There were several great parties after each day of the conference. SEMRush had a gathering at Gilley’s, US Search Awards had their party, and the end of conference Pubcon party at Hofbrauhaus stand out. There were great people at each event and offering food and booze during each party made it easier for attendees to mingle and chat with each other.

The bar in TI, Breeze Bar, was a spot where you could find someone from the conference hanging out at any point throughout the day/night. I had several great conversations with people I would never had imagined meeting. Again, everyone was more than happy to chat, share stories and experiences, and keep communication going after the conference. 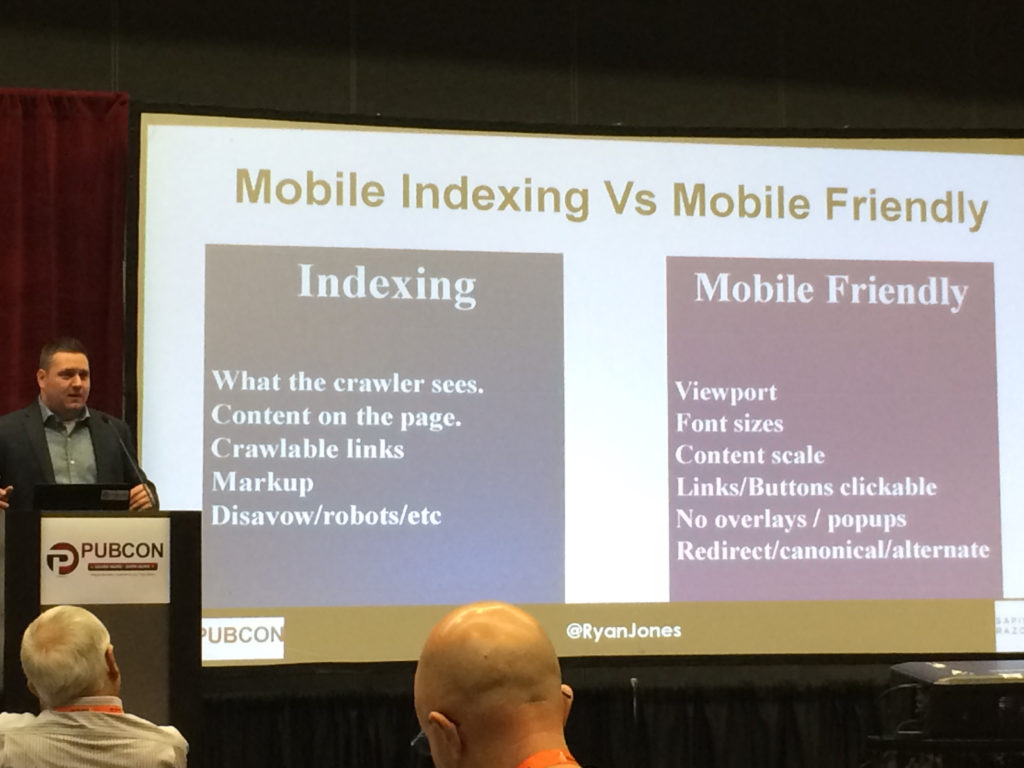 There were several dozen sessions each day. I’ll dive more into this below, though there were some good sessions packed with useful information. There were solid sessions on my niche in Local SEO, mobile first, AMP, Analytics, Paid, and Content. Many of the speakers I listened to seemed to keep their session content at a higher level, my guess due to the wide range of attendee skill. There were some individuals who had been in the digital game for a couple of years, and others who had 15+ years.

I was looking forward to the keynotes on all 3 days as there were some top notch speakers and presenters. Having not previously heard the Googler’s in person, I was anticipating what information (if any) they would share. Joost de Valk, Peter Shankman and the Google crew gave the most noteworthy chats from my perspective.

Joost spoke about building a brand, doing good SEO, optimizing for the user,  and optimizing for audiences over algorithms. It was one of the better talks all week, to a nearly packed house.

The 3 man Google panel of Gary, Nathan and Eric provided some useful information and more banter. It was obvious the crew didn’t want to give much information away, nor did they want their words taken out of context (who says digital marketers do that??), so there wasn’t much to go on here. There was a lengthy debate about links, disavow files and manual actions though it produced much of the same information we’ve been hearing for years.

Peter Shankman gave a great opening keynote speaking about transparency, relevance and being top of mind. He reminded us that we don’t need to be the best, we just have to be better than our competitors. He also said that customers don’t think we are awesome if we tell them, they want other people to tell them we are awesome. True statement. And, I’m awesome.

What more can you say? The location was fantastic, especially from someone coming from the cold of Chicago. The city, accommodations, conference location and after conference activities were all solid. No complaints.

In my opinion, there were too many sessions and no way to get to all of them. There were times when I wanted to hear more than 1 presenter during a session time slot, but had no easy way to do so. I wanted to drop in on several Local SEO sessions to see if I could pick up any nuggets to take back, but also wanted to expand my knowledge with Facebook paid ads or analytics. Having so many sessions at the same time made it difficult to do that.

Towards the end of the conference, I would sit in on the first half of one session and then move to another session for the 2nd half. This was not ideal because it was difficult to drop in on a session and grasp all of the information. In addition, I felt like I was disrespecting the speakers who had all worked hard to prepare their decks.

I think it would be more efficient to either minimize the number of sessions, or be able to record the sessions so attendees can view the ones we missed. There was definitely FOMO on a few presentations I wish I would have gone to.

Continuing with the sessions, there were a few which I thought were lacking on content, knowledge or both. This could be because of the presenters dumbing down their content because of the wide range of attendee knowledge, but there were others which were flat out spewing wrong information. A couple in the Local SEO range come to mind. I won’t say which ones here (DM or email me if you want to talk more about it).

I overheard other attendees saying similar things with other sessions they attended. Pubcon is a large, prestigious conference, so to have some of the sessions turn out the way they did shocked me a bit.

Since this was my first Pubcon, I was mostly in awe at the amount of people and quality of speakers I was surrounded by. It was only after a couple of days, I realized, many of the speakers didn’t attend other sessions. There were others I only saw at the TI Breeze Bar. It didn’t bother me what the speakers or other attendees were doing. It is a conference, in Vegas, and for some, probably a vacation from work. The only drawback would be, if an attendee was not staying at TI or did not happen upon the same people at the bar like I did, it would be near impossible to meet some of the great people I did. Which brings me to another point……

There should be an easier way to network. I mentioned above that the networking and opportunities to network (parties, bars, etc) were fantastic. I do believe that. This could be because I was staying at TI and stumbled upon some great people at the parties. Had I not, I would not have been able to network the way I did. I was standing outside the final Pubcon party on Thursday and met Ken Hyder and Scott Hendison. We were chatting with another attendee who had a great idea of having a networking app simply for Pubcon. This would be one way to connect and I’m sure people smarter than me have other ideas. There were many people who have been in the industry for a long time, speak and network often and already have a solid base of industry friends. For others, it can be difficult to break into that routine or meet influencers if they don’t do the conference circuit or speak often.

#pubcon Salon A a/v is CURSED! Projector broke again and @GregGifford had the smart idea to use the monitor instead. As we got that set up, projector turned on again! Kudos to @mahannay for being a trooper! pic.twitter.com/0axLb38Bpw

This was a big conference with dozens of sessions and at least 10 rooms being used, not to count the exhibit hall and keynote area. I expected some technical issues simply due to the amount of production which needed to take place, but the issues in Salon A were a bit ridiculous. Salon A, for the most part, was a Local SEO room. One of the sessions was nearly derailed as the audio and visual stopped working. Luckily there were some smart people in the room and their quick thinking turned a disaster into a mishap the speakers will share forever. It wasn’t ideal but Greg Gifford and others made the most of a bad situation.

Overall, I thought my first Pubcon was a worthwhile experience. I came away with a few new ideas, met some awesome people and caught up with others I hadn’t seen in a while. Thanks to the Pubcon team for organizing the event, and the sponsors, speakers, and attendees for making the conference a great place to be for a week.

Check back later for a recap of the sessions I attended.